We offer  Mild Steel (MS) Epoxy Painted and rubber Lined Filters which are available from 200 mm to 3600 mm diameter sizes and from 1 M3 to 100 M3/hr flow rate and are designed and operated on filtration rate of 12-20 m/hr.

Dual media filter contain anthracite along with fine sand reinforced by marbled and gravels. These filter consist of a coating of anthracite (1.25-2.5mm) resting on a coating of fine sand (1-1.5mm) Anthracite is coarse and has more dirt holding capacity as compared to fine sand. Dual media filters are used in places where the raw water contains suspended contaminants, turbidity and iron. Dual media filters provide very efficient particle removal under the conditions of high filtering system amount. These filters use layers of anthracite and garnet contaminants as the filter medium, with filtering system amount of 98% down to 2 microns. The dual media filters employ an automatic backwashing feature, which employs a variety of air and water to maintain unit efficiency.

water softener is a unit that is used to soften water, by removing the minerals that cause the water to be hard.

When water is referred to as 'hard' this simply means, that it contains more minerals than ordinary water. These are especially the minerals calcium and magnesium. As more calcium and magnesium dissolved in the water, degree of hardness of the water increases. This is the cause of the fact that soap doesn't really dissolve in hard water. Hard water causes a higher risk of lime scale deposits systems. Due to the scale build-up, pipes are blocked and the efficiency of hot boilers and tanks is reduced. This increases the cost of water heating by about fifteen to twenty percent. 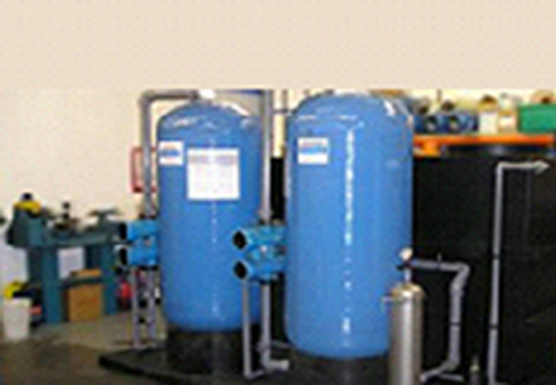 Water softening is the removal of calcium, magnesium, and certain other metal cationsin hard water. The resulting soft water is more compatible with soap and extends the lifetime of plumbing. Water softening is usually achieved using lime softening or ion-exchange resins. Hard water is frequently unsuitable for many industrial and domestic purpose. When water is referred to as 'Hard' it simply means, that it contains excess of calcium (Ca) and magnesium (Mg) Ions than normal water.

Carbonate hardness is known as temporary hardness and non-carbonate hardness is known as permanent hardness. The degree of hardness of the water increases, when more calcium and magnesium ions are dissolves. These ions have their origins in limestone sediments and also from carbon dioxide which is present in all waters exposed to the atmosphere and especially in ground water. The easiest way to soft the hard water is through Ion exchange process.

Softening is the ion exchange process, it is done through resin, the most common and probably the easiest method of removing hardness (that is calcium and magnesium) from water and suitable for utility purpose. As the name implies ion exchange is a process in which undesirable ions are exchanged for more desirable ions. The softening process consists of passing raw water containing hardness through a bed of cation resin in sodium form. The hardness ions Ca & Mg are taken up by resin and in exchange, the sodium ions are relinquished from the resin. This is called the service cycle, where the hard water is being softened.

Water softeners are solution to such problems. It serves the removal of the ions that cause the water to be hard, in most cases calcium and magnesium ions. Iron ions may also be removed during softening.

We offer series of reverse osmosis plants especially designed for the desalination of fresh water for industrial purposes:

DM plants are ion exchange process plant for the removal of  minerals from the water .Strong acid cation + Strong base anion resin systems. These systems consist of two vessels - one contains cation-exchange resin in the hydrogen (H+) form and the other contains anion resin in the hydroxyl (OH-) form (see picture below). Water flows through the cation column, where all the cations in the water are exchanged with hydrogen ions. The decationised water then flows through the anion column, here negatively charged ions are exchanged for hydroxide ions which then combine with the hydrogen ions to form water (H2O). These systems remove all ions, including silica.

In general the strong acid cation and strong base anion resin system is the simplest arrangement and DM water that may be used in a wide variety of applications can be obtained with it.Envirotech offers two most common types of deionization which are:

The two-bed de-ionizer consists of two vessels - one containing a Cation-exchange resin in the hydrogen(H+) form and the other containing an anion resin in the hydroxyl (OH-) form. Water flows through the caution column, whereupon all the captions are exchanged for hydrogen ions. To keep the water electrically belanced, for every monovalent Caution, e.g. Na+, one hydrogen ion is exchanged and for every divalent caution, e.g. Ca2+ , or Mg2+, two hydrogen ions are exchanged. The same principle applies when considering anion exchange. The desalinized water then flows through the anion column. This time all the negatively changed ions are exchanged for hydroxide ions which then combine with the hydrogen ions to form water (H2O).

Although more efficient in purifying the incoming feed water, mixed-bed plants are more sensitive to impurities in the water Supply and involve a more complicated regeneration process. Mixed-bed deionizers are normally used to 'polish' the Water to higher levels of purity after it has been initially treated by either a two-bed deionizer or a reverse osmosis unit.

The extremely robust hollow fiber membranes are operated in the economical cross flow/ dead-end process, thus reducing water and energy consumption to a minimum. A PLC guarantees fully automatic operation of the filtration system. A variety of control options ensures the highest possible degree of flexibility and operational reliability. Adapted to the untreated water quality, chemicals can be optimally added to support the cleaning process.